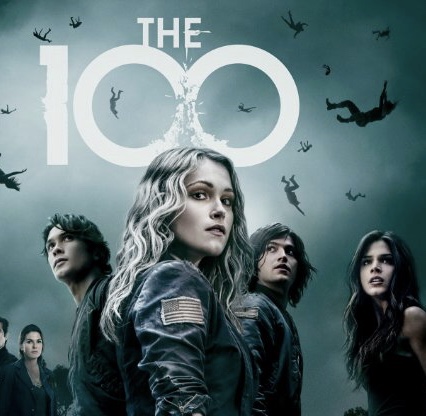 I’ve been watching The 100 since two days ago, and it is a little surprise to me. This is the second US TV series I’ve watched. The first is Game Of Thrones. But I haven’t watched it all over yet, just watching in the season 2. US TV series is growing more and more popular then ever nowadays in China which is my country. I think, most people in my country who like watching US TV plays just because they wanna learning English even better. The other reason just is don’t want to enduring the bore of Chinese TV dramas’ anymore. Is anybody watching this TV Series too?

Just to think about surviving in doomsday is so exciting, don’t you? The 100 will bring you this kind of feeling. After lived in outer space for nearly a century to avoid the nuclear radiation on the Earth, human being send 100 criminals to the Earth for a test that if human could living in the Earth, or if the radiation is still fatal to human or not. When the 100 people land the Earth, they find that some of their thoughts about the Earth was wrong, there have other “people” living in the Earth except them. What adventures they’ll get? Just come and watch it with me, that’s the point of it, isn’t it?

Die one by one, who’ll be the next? Maybe it’s the one of your favorites, who knows? And I’m so curious to see how many people of the 100s will survive to the end of this TV Series? Let’s wait and see.

There’s a character almost drive me crazy, he’s Bellamy Blake. Bellamy is so selfish that causes the deaths of the other people of the space-station society. And this is just for himself and his young sister’s safety. What a selfish man? But a drama is just a drama, and Bellamy is just a character, if he hasn’t done this, maybe the title of this TV series would be “The 500”?

Another point I get from this series is that how heartless could human be when we in difficult positions like this. If we get into this kind of difficulties one day, what would happen to us? Even better or worse?

Adventures always can attract a large number of people, especially doomsday. Why they always have so much attraction to people? Do you have any idea? I think it’s the same reason of why people like watching horror movies. Look on other people in dangerous situations and how do they escape from dangerous seems like the point. Everyone wanna be a hero, and heroes always in big dangers, surviving from dangers is their life. And it’s so interesting to us who not live in movie world but reality.

I’m going to end this article soon, because I can’t wait to continue watching The 100 series. If you are watching this series too, you can leave your comments here, and I’m looking forward to them.